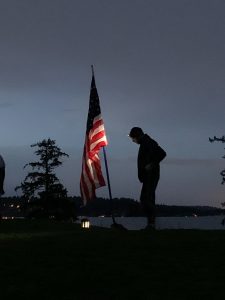 12 Men showed up on a cold, dry day, more than half arriving 10-15 minutes early, at Heritage Park in Kirkland, WA to get some schooling on Qing and got a beatdown to boot.

ProTip: Count the PAX during SSHs.  It is important to know the count of PAX to ensure no one gets left behind.  Final count done at CoT.

Next was 10 IC Merkins

Sidebar to explain to the PAX the three specific parts in preparing the next exercise: F3 Q School – Exercise Command Progression

Continued with IC Windmills and Imperial Walkers, and then we were off to the races.

I recall YHC having some issues calling cadence for Imperial Walkers, with the “1” not always being on the right elbow to left knee….looks like we all have some work to do to get better.

I believe that Papas called a set of Merkins for us as well; given he had never Qed before, he did very well to call not only the preparation commands, but also the cadence.  Well done sir!

Thang: We moseyed over to the stairs on the north side of the park next to the tennis courts.  YHC asked Combover to watch the 6, to make sure no man was left behind.  Thank you Combover for performing that role for us; very appreciated.

Prior to starting the next routine, YHC gave some instruction on F3 Q School – F3 Mission, Core Principles & Credo.  With this given, that prepped the way to have the PAX repeat back what they learned along the way.

The Long Ladder: YHC was feeling generous (mistake) and offered to share the Q by asking two PAX members to help design the next workout.  The workout is a Long Ladder (totally a name YHC made up).  It consists of doing 10 exercises at the top of the stairs, 1 at the bottom, 9 at the top, 2 at the bottom…until we get back to 1 at the top and 10 at the bottom.  I asked Softball (whoops, this was my mistake) what we should do at the top, and he said Lt. Dangers, which he explained is a burpee followed by 2 Bonnie Blairs.  YHC then asked Snare (hate hate) what he thought we should do at the bottom; he chose jump squats, which ended up being sumo squats for most folks.  This all took a while as those Lt. Dangers were no joke!  This entire exercise was quite the leg crusher.

As we came to the finale, YHC suggested we do the last 10 jump squats together.  After seeing some PAX with unsafe form on their squats, a demonstration was provided to clarify what a good squat looked like; good form is important to keep you healthy and strong; never sacrifice the next workout to do more or faster repetitions.  Arches called cadence, using the method of calling “down” while the PAX counted on the up.

Next lesson was the first test of the learnings from earlier in the workout: what is the Credo? F3 Q School – F3 Credo Quiz. Great work by Hopps, being patient and diligent to get the entire thing recited.  Thank you for following through sir.

We then took a short walk to enter the tennis courts for some Wall of Fire.  YHC started with pairing off but moved to sets of three to allow each PAX to get both Balls to Wall love and People’s Chair love.  YHC called out that each member of the threesome would run out to the other side of the court, do 10 of an exercise while the other two members switched between Balls to the Wall and People’s Chair (sitting against the wall)…and each team member should do the 10 reps twice.  The first exercise that YHC chose was Jillian Michaels (what YHC expected Softball might choose on the Long Ladder….that would have been way better!).  YHC demonstrated the exercise (Pro Tip!!!!: The leader should not only show the PAX what the exercise looks like but also demonstrate what good form looks like).  Nomad was on my team and smartly said that he would do the Jillian Michaels slowly to ensure he did not hurt himself, as he felt concern from prior experience; wise choice Nomad!

Once we finished up the first set, YHC brought the men into a circle and asked the 4 virgins to practice some cadence.  Each picked their own exercise, prepared it with the three lines of exercise preparation taught previously and called cadence to work us all out.

The next set of Wall of Fire was with V-Ups.  YHC demonstrated, whining to the PAX about how earlier in the week Dig Dug worked me out and my abs were killing me.  That did not matter, so we got into different groups of three (meet a new man each time) and completed two sets of V-Ups each.

MoM: With about 10 minutes to go, YHC got us back into a circle on the tennis courts for some more calling exercises and cadence calling practice.  We got about half way around the circle when time ran out.

At this point, YHC explained the tasks to be completed at the CoT (a question arose, so CoT was defined as Circle of Trust).  We went through the Mission and Credo again and counted and named -o-rama.  F3 Q School – Mission, Credo & CoT.

WoW: YHC mentioned that with school cancelled and everyone WFH, this brings challenges to some parents.  Microsoft has offered to provide 2 weeks of paid time for parents with conflicts in child care while school is out.  YHC supports his employees that need this time, and YHC’s leadership supports this as well, indicating that personnel are more important than a few upset customers possibly affected by the missing engineers.  Totally love this support for my team from our LT #3rdF.

A quick and grateful thank you to Softball for doing the videos for us!  Heritage Park is not his normal AO, so YHC is very appreciative of his sacrifice to support the Q School.  #greatleader Thank you Softball!! 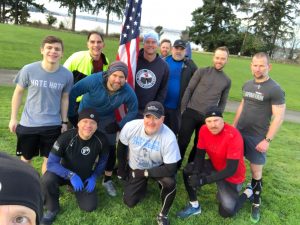 As always, appreciate the opportunity to lead and to share leadership with new and tenured PAX.  #intotheday